Does DHEA Improve success for IVF/ICSI with Decreased Ovarian Reserve? By Dr. Bruce Albrecht on May 22, 2019

Does dehydroepiandrosterone improve pregnancy rate in women undergoing IVF/ICSI with expected poor ovarian response according to the Bologna criteria? A randomized controlled trial

The aim of this study was to provide the best available evidence on the role of dehydroepiandrosterone (DHEA) treatment in improving the outcome of in vitro fertilization (IVF)/intracytoplasmic sperm injection (ICSI) in women with poor ovarian response (POR). 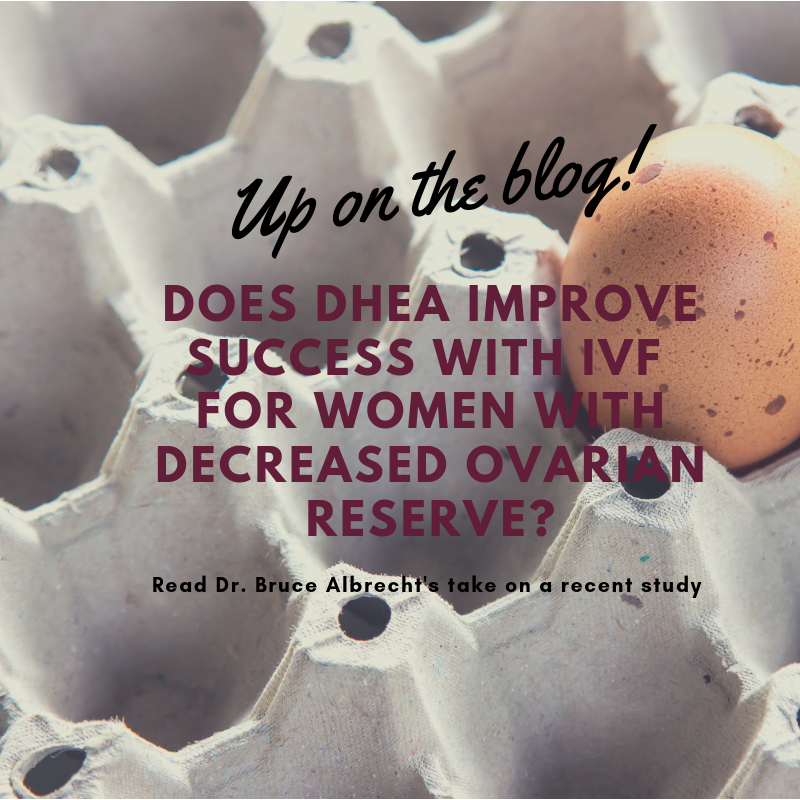 The study was performed at Cairo University in Egypt utilizing 140 women with decreased ovarian reserve.  They were randomized into two equal groups with the study group receiving DHEA 25 mg three times daily for at least 12 weeks before their IVF/ICSI cycle.  The control group received identical appearing placebo tablets.

The controlled ovarian hyperstimulation for their IVF cycles was started on D2 of the menses utilizing human menopausal gonadotropins and Cetrotide 250 micrograms was started when the lead follicle reached 14 mm in diameter.

DHEA increases the number of oocytes, fertilization rate, fertilized oocytes, and clinical pregnancy rate and ongoing pregnancy rate in women with POR according to the Bologna criteria. DHEA was well tolerated by the patients and was associated with less COH days and gonadotropins doses.

Dr. Albrecht's take on this study:

This is one more study demonstrating the efficacy of DHEA in patients with decreased ovarian reserve.  I have been using this treatment (along with a number of other supplements) since approximate 2005.  Despite the overwhelming evidence, there are many REI physicians who simply do not believe that it is beneficial.

In reviewing the studies evaluating DHEA administration, the ones that seem to show no benefit are the studies that administered the DHEA for a very protracted period of time – less than three months often times only during the actual stimulation phase of the IVF cycle.

The original study reported by Norbert Gleicher and associates in 2005 was a case report of a single patient.  Their patient showed no benefit until she had been on treatment for three months and quite remarkably, the ovarian reserve continued to improve over the next year.  Fortunately, this first patient had a dramatic response to the effects of DHEA. If that had not been the case, the benefit of DHEA might have been overlooked.

In my own experience, I see that it improves the ovarian reserve and approximately half of patients who take it, and it works better if the patient is <40 years of age.  Only a small percentage of patients seem to continue to have more and more improvement the longer they are on the supplements.

It is my feeling that every woman has a fertility window that begins to close after age 30 and for most women completely closes in the early 40s.  I suspect that the supplements can crack open the window of opportunity and keep it open for a while but eventually it will start to shut again.  Therefore, the supplements are not a panacea for the aging ovary and eggs and will work only for a limited amount of time.