Studies Evaluating Levothyroxine To Reduce The Risk of Miscarriage By Dr. Bruce Albrecht on October 29, 2019

Thyroid peroxidase antibodies are associated with an increased risk of miscarriage and preterm birth, even when thyroid function is normal. Small trials indicate that the use of levothyroxine could reduce the incidence of such adverse outcomes. This study was conducted as a double-blinded, placebo-controlled trial to investigate whether levothyroxine treatment would increase live-birth rates among euthyroid women with thyroid peroxidase antibodies and a history of miscarriage or infertility.

The study evaluated almost 20,000 women from 49 hospitals in the United Kingdom for thyroid peroxidase antibodies and thyroid function.  952 women were found to have thyroid peroxidase antibodies but were euthyroid (defined as a TSH level of 0.44 to 3.63 mIU per liter and a free thyroxine (FT4) level of 10.0 to 21.0 pmol per liter).  These women were randomly assigned to receive either 50 µg once daily of levothyroxine or placebo starting before conception through the end of pregnancy.  The primary outcome was live birth after at least 34 weeks of pregnancy.

The authors’ conclusion was that the use of levothyroxine in euthyroid women with thyroid peroxidase antibodies did not result in a higher rate of live births than placebo. 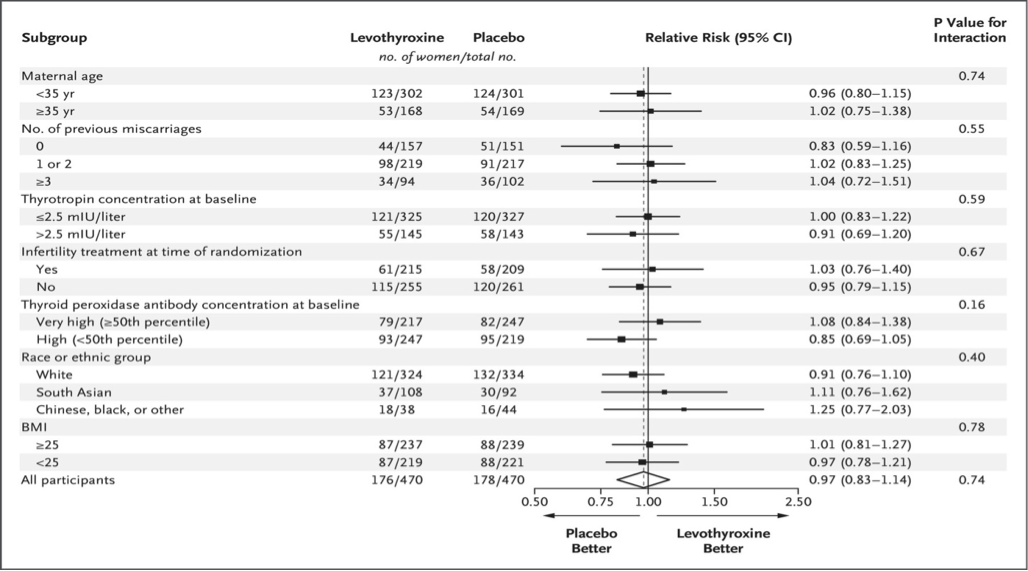 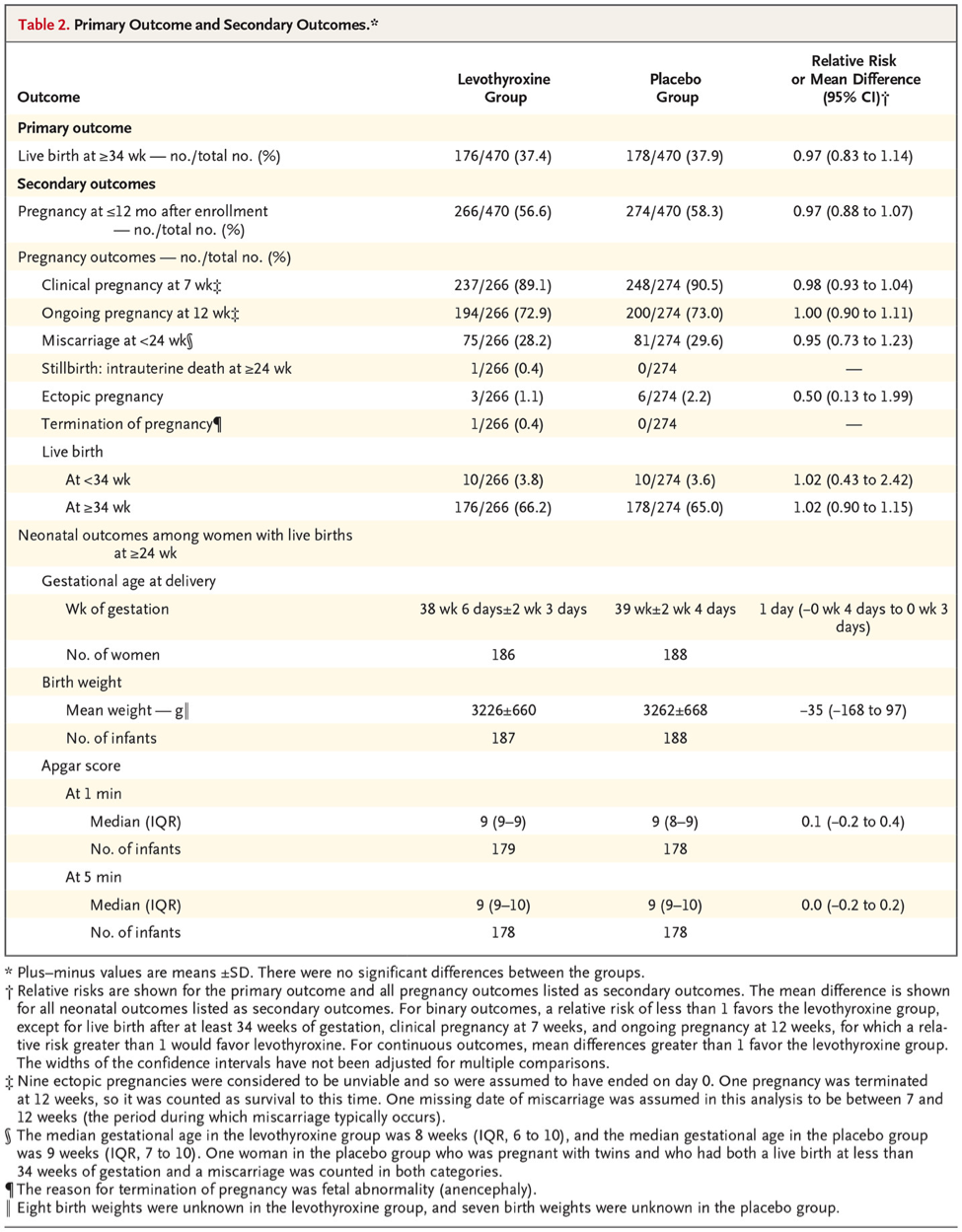 Dr. Albrecht's take on this study:

Miscarriage is one of the most common complications of pregnancy. Preterm birth, which occurs in approximately 7% of live births is the single largest cause of neonatal complications and death.  Both miscarriage and preterm birth substantially affect the physical and psychological well-being of prospective parents and have major cost implications for patients and health institutions.

Three randomized trials have examined the use of levothyroxine in women with thyroid peroxidase antibodies and normal thyroid function. The pooled results of the first two trials, one involving an unselected population of 115 women and the other involving 72 women undergoing assisted conception, showed a substantially lower incidence of miscarriage among women taking levothyroxine than among those who received placebo or no treatment (relative risk, 0.48; 95% CI, 0.25 to 0.92; P=0.03). [Negro et al.  Levothyroxine treatment in euthyroid pregnant women with autoimmune thyroid disease: effects on obstetrical complications. JCEM2006;91:2587-2591.Negro et al.  Levothyroxine treatment in thyroid peroxidase antibody-positive women undergoing assisted reproduction technologies: a prospective study. Hum Reprod2005;20:1529-1533.]

A third trial was limited to women undergoing in vitro fertilization. It showed that the use of levothyroxine did not reduce the incidence of miscarriage or preterm birth.  That trial involved 600 women, among whom there was a total of 220 pregnancies and 23 miscarriages.  [Wang et al.  Effect of levothyroxine on miscarriage among women with normal thyroid function and thyroid autoimmunity undergoing in vitro fertilization and embryo transfer: a randomized clinical trial. JAMA2017;318:2190-2198.]

The strength of this study is that it is larger than any of the previous studies; however, there are some major limitations. Firstly, they studied levothyroxine at a fixed dose of 50 µg once daily.  In our practice, we attempt to titrate the dose of levothyroxine to result in a TSH level 0.50-1.0.  We have seen that "over suppression" of TSH without becoming hyperthyroid can actually decrease the level of thyroid peroxidase antibodies. The assumption is that with a lowered thyroid antibody level the degree of inflammation is reduced and therefore the adverse impact of the thyroid antibodies is reduced.  The doses that we find we are using in patients is anything from 25 up to as much as 150 µg daily.  The "one size fits all" approach of this study certainly simplified the conduct of the study, but it might not be the proper way to treat this group of patients.

My conclusion, the answer as to the role of thyroid peroxidase antibodies in euthyroid patients as a cause of miscarriage and preterm labor is still inconclusive.

The 2017 guidelines of the American Thyroid Association stated that “insufficient evidence exists to conclusively determine whether levothyroxine therapy decreases pregnancy loss risk in thyroid peroxidase antibody–positive but euthyroid women who are newly pregnant” and recommended that the administration of levothyroxine to these patients with a history of pregnancy loss "may be considered given its potential benefits in comparison with its minimal risk.”  [Alexander et al.  2017 Guidelines of the American Thyroid Association for the diagnosis and management of thyroid disease during pregnancy and the postpartum. Thyroid2017;27:315-389.]

Personally, we will continue to use levothyroxine therapy until this question can be definitively resolved as I agree with the American thyroid Association that there is minimal risk and certainly potential benefit.